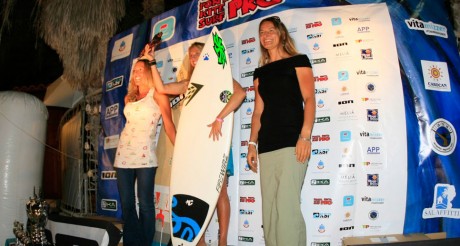 I was hoping to write a lot more updates from my trip to Cabo Verde, but I have not been able to be online as much as I had hopped. The costs to be on the internet in this country are outrages. It costs $8 for 1 hour of internet at the hotel we stayed at.

I actually just got home from Cabo Verde and it took 59 hours of total travel! I decided to go home early since the event is over and there’s no swell on the way and the forecast for Hawaii looks really good.

Since we arrived in Cabo Verde on November 21st we had only one real day of wind and waves. Everyday we would drive around the island looking for some small waves to ride, but the wind was also not cooperating. I kited one day for less than an hour in chest high surf and very light wind. We attempted to kite a few other times, but the wind was so light that I could not stay upwind. Also, the launching and landing was very difficult at most places, with exposed shallow reef, sharp rocks everywhere and lots of sea urchins. Some of the riders would ride at Kite Beach on the east side of the island but this spot was pretty much straight onshore and I just was not motivated to kite onshore there.

The KSP event ran only one day at Ponta Preta and they were able to run three men’s heats and the wind was as offshore as it can get. I tried to ride a few waves that day but was not able to even get into a wave due to the crowd and the light wind. It was the strangest kiting experience I have ever had, I would be tacking parallel to the beach, almost going back in and then once I would turn around to catch a wave I would end up getting stuck behind the waves because the wind was light and blowing me back out to sea.

The only day the wind was blowing consistent and strong and there was some fun waves to ride was during the expression session of the KSP event at a spot called “Secret Spot”. This day was super fun with head high sets and the wind blowing around 30+mph. I was so happy to finally get on the water and ride some waves. I stayed out as long as I could during and after the expression session. It was not easy for me because the wind was so strong I needed a smaller kite, but I was on a 5m kite and a lot of other riders were also using small kites.

The expression session for the women was divided into 2 heats of 20 minutes each. Everyone was riding the smallest kite they had, 5 and 6m mostly. Even though I was super overpowered I managed to do well and win the expression session. I was very happy with the results especially competing against some of the big names like Kirsty Jones and the current world champion Ines Correia.

Because of the lack of conditions over the two weeks, I was only able to get a few photos and video clips at Secret Spot and not one shot from Ponta Preta. The island has incredible potential and maybe one day we will return during the proper season. All the locals were saying February and March are far more consistent and from the photos I saw it looks like we missed out on some amazing surf and wind.

On a brighter note, we are heading home to a solid forecast in Hawaii and hopefully we can work on getting some photos and video footage to put together a new video clip and post some photos.  I had a great time hanging out with all the riders and hope some of our new friends from Peru and Cabo Verde can come visit us in Hawaii and enjoy the fun conditions we have at home.